Sir Yehudi Menuhin has written, “He is without doubt one of the most brilliant and musical of violinists…Alexander Markov will certainly leave his mark on the music lovers of the world and in the annals of the violin virtuosi of our day.” Awarded a prestigious Avery Fisher Career Grant in 1987, Markov made his New York debut recital at Carnegie Hall in 1983. A Gold Medal winner at the Paganini International Violin Competition, he has appeared as a soloist with some of the world's most celebrated orchestras including the Philadelphia Orchestra, the BBC Philharmonic, Orchestre de Paris, the Montreal Symphony, Budapest Festival Orchestra and the Mostly Mozart Festival Orchestra. Markov has performed with such  conductors as Lorin Maazel, Charles Dutoit, Christoph Eschenbach, Franz Welser-Möst and Ivan Fischer, and has been sharing stages with
Martha Argerich and other luminaries.

Alexander Markov’s  recent headlining concerts  at Carnegie Hall were  filled to capacity  and his upcoming engagements  are  scheduled in USA,  Europe,  Russia, Japan,  the Middle East and South America.

Alexander Markov’s reputation in the 19th-century romantic virtuoso repertoire is second-to-none. One of the few violinists in the world who performs the entire set of the 24 Paganini Caprices in a single recital, he is featured in the internationally acclaimed film about great violinists, “The Art of Violin,” directed by the legendary film director Bruno
Monsaingeon. His CD release and the video of the 24 Paganini Caprices, distributed world-wide by Warner Classics International,  caused a sensation and became a best-seller.

In 2006, Warner released the long-awaited DVD of the 24 Paganini Caprices and it instantly became one of the best-selling classical DVD’s on Amazon. Many Caprices were posted by fans around the world on YouTube and some clips  have over  three  million hits.

Markov's musical journey goes  beyond his work as a classical violin soloist. While attending high school, he discovered and fell in love
with rock music – a love affair that merged with his first love, classical music, when he has co-written The Rock Concerto with James V. Remington who also custom-designed Markov’s gold, 6-string electric violin. Built by Barry Lipman, the new, patented electric violin is one-of-a-kind in the world and  has a unique sound capable of creating the most extreme  contrasts from the soft and sweet to the most powerful and dramatic. The vision of the project is to bridge a gap between rock and classical audiences closer together and to  attract young people who otherwise never go to a symphony. Markov continues to write numerous new compositions combining  classical and rock genres  featuring the electric violin, orchestra, rock group and a choir.

Alexander Markov was born in Moscow and studied violin with his father, concert violinist Albert Markov. By the time he was eight years old, he was already appearing as a soloist with orchestras and in double concertos with his father. The father and son team still perform
together in duo-program repertoire in concert halls worldwide. Markov emigrated to the U.S. with his parents and received his United States citizenship in 1982. 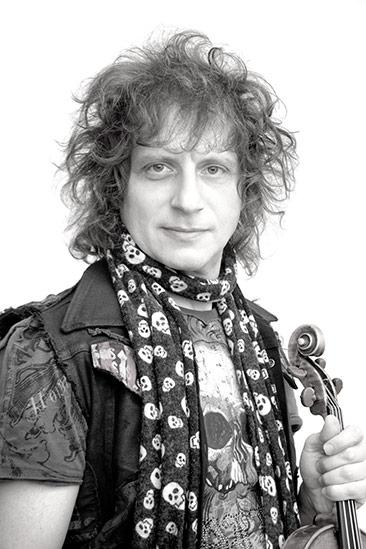 Internationally celebrated violinist Alexander Markov has been hailed as one of the world’s
most captivating and versatile  musicians. Whether performing as a soloist with prestigious orchestras at  major concert halls around the world  or playing at  sports arenas  in front of 25 000 people at the NBA game on his gold electric violin, Alexander Markov always makes an instant connection with his audiences.